In a few days a group of 12 IFC fencers will travel to Dallas, Texas to participate in the 2016 USFA Fencing Summer Championships and July Challenge. The event is stretched from June 29 until July 8. The IFC fencers will participate in multiple epee and foil events from Y14 to Vet 70. The athletes, who qualified and registered this year include: Anna Paul, Geeta and Nikita Jhangiani, Maciek Zmyslowski, Tony Coonrod, Jakub Nowak, Zimo Zhu, Evan Stauber, Peter Kulaga, Bob Baldwin, John Lartz and David Swanson.

In early May, Illinois Fencers Club held its annual Dominick Epee Challenge at its home club at Lions Recreation Center, Mount Prospect, IL. This tournament is the Chicago area's largest epee only fencing event, and it brought in over 100 fencers from many states, ages 12 to over 70. In the Senior Mixed Epee, an A3 event with 88 competitors, IFC fencers Maciek Zmyslowski won first, David Zeko placed second, and Jakub Nowak finished fifth. In the Senior Women's Epee Anna Paul won the silver medal. Among the nine teams competing, the IFC team (Zmyslowski, Bradford, Zeko and Zhu) won first place. In the Y12 Mixed Epee event IFC fencer Kaitlin Oh took second place, while Victoria Kulaga and Matthew Oh tied for third.

For two weeks, from June 29 to July 8, Illinois Fencers Club (IFC) athletes competed at the USA Fencing National Championships and July Challenge, the world's largest fencing tournament. The event was held at the Kay Bailey Hutchinson Convention Center in Dallas, Texas. Nearly 4,000 fencers competed for medals in 90 events. The tournament featured two components: the USA Fencing Nationals for U.S. athletes only ranging in age from eight to 80+ and the July Challenge, which included both top American as well as foreign fencers in the cadet, junior and Division I age groups.
Maciek Zmyslowski, an IFC Youth Program alumnus, brought home a bronze medal in Division IA Men's Epee, an A4 event with 149 fencers. He adds this bronze medal to his two silver medals in the same event from 2013 and 2014. Maciek (24) is from Des Plaines, IL and currently pursuing a Ph. D. from the University of Chicago. He says that "at some point (fencing) is a test of self confidence and a way of looking deep within myself to find what it takes to get to the top levels of competition. But mostly, I use it as an avenue to meet friends and to enjoy myself."
In addition, IFC's younger fencers Peter Kulaga and Geeta Jhangiani placed in top 32 in their events. Peter had a strong performance in Y14 Men's Epee, placing 11th in a field of 188 fencers, while Geeta finished 28th out of 149 fencers in Y14 Women's Epee.
Peter (15) is from Niles and a sophomore at Northridge Preparatory School. In addition to having a great season winning medals at local, regional and international tournaments, Peter was also recognized for his academic excellence and named to the USA Fencing All-Academic Team. Peter says that fencing teaches him "how to be quick minded and how to think up strategies." He finished the season as the 13th highest ranked Y14 men's epee fencer in the U.S. and plans to "keep fencing through (his) whole life."
Geeta is also 15 years old and a sophomore at Adlai E. Stevenson High School, living in Vernon Hills. For Geeta "fencing is a sport that uses much more strategy and focus than any of the other sports that (she) have done before." She says:" It's a unique sport, and I only rely on myself since it's an individual sport. I am completely immersed in the sport, and all the problems that I have in school and in life seem to come off my mind when I am fencing."
The Illinois Fencers Club promotes and teaches the Olympic sport of fencing to students of all ages and skill levels and provides a friendly venue for members to practice their sport. It is a member operated non-for-profit sports association that has been serving beginning, recreational, and competitive fencers for more than 40 years.
IFC offers affordable classes with high quality instruction for kids, youth, and adults in several skill levels and offers three clinics for advanced competitive fencers each year. The athlete-centered Youth Program promotes athletic excellence and personal growth. It teaches self-awareness, responsibility, resilience and cooperation to assist fencers in reaching athletic, academic and personal success.
While fencing is typically one a costly sports, IFC is committed to providing access to our favorite sport for reasonable fees. The current membership fee is only $225 per year, providing the opportunity to fence 7 to 8 hours per week, 12 months a year.
Illinois Fencers Club is open to visitors Monday or Thursday evenings in the lower level of the Lions Recreation Center at 411 S. Maple Street, Mount Prospect, Illinois, just three blocks from the METRA station.

Taft Names Teachers of the Month for December

Both "embody the spirit and commitment to excellence that make us proud to have them on our staff," according to a statement from school officials. 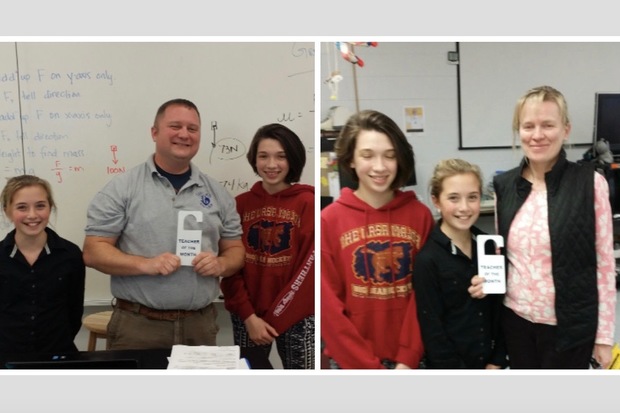